Outside my window this morning!

When we first moved in to the house Melissa’s parents gave us a hummingbird feeder for our backyard. (For those still unclear, like myself, the front yard is riverside and the back yard is roadside…. I’m not sure exactly why because my natural inclination is the opposite but that’s the way it is and I’m adjusting to that fact).This feeder is positioned in the open, in a patch of day lilies. And it gets a pretty good stream of traffic throughout the day.

Lately the feeder has gotten more interest than before. Maybe because the blooms are all gone and it’s late in the season. I have no idea why it’s getting more attention (but ask me in a year! I bet I know A LOT more!) Because of all of this attention we are often surprised to discover that the feeder is out of juice. Whatever the case I have started to see enough hummingbirds that I have started to actually observe them and their behavior. 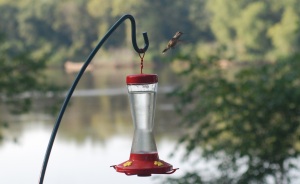 The feeder with the river in the background.

Think of the largest bumblebee you have ever heard in your life. And for this exercise you can even think of one from a B-Movie. That’s how a hummingbird sounds the first time you hear it before you see it. It makes you jump out of your skin. You’re inside thinking goes something like, “Holy crap! I’ve got to get out of here” and you want to swat at wherever the sound is coming from but your 38 year old instincts (honed by far too many bee stings to count) tell you not to. So you flee as quickly as possible. Only then do you realize it’s the very amazing hummingbird coming by, headed to the feeder.  And then you have this moment of, “Dang. I hope it doesn’t fly away because I was such a knucklehead” moment.

Eventually you get a little bit more used to the sound and actually seeing them. And it is quite amazing. It is absolutely something to watch the precision with which they fly. They move in starts and stops. And by that I mean PRECISE starts and stops.

All of that said nothing could have prepared me for the event this morning. As I stood in the deck outside my office talking on the phone, a hummingbird came up to me – about a foot away, slightly above me – and hovered for a good 2 seconds.

Now think about that. Two seconds is an eternity in that situation. I had no idea how to react. Not only was I completely ignoring my client on the other end of the phone, I felt like my feet had been stuck in cement. All the little hummingbird did was look at me. But how weird is that! If I could understand its message it was something like, “Hey buddy… how about you fill that feeder back up?”

It was a very bizarre encounter. But in retrospect it was also really, really cool.

Soon after I went out and got the empty feeder and put it on the railing outside the door – figuring I would wash the ants out later when we had made more juice.

2 hours later I went back out on the deck to wash out the feeder. What should happen? Not one, but two hummingbirds came to pay me a visit. I felt like I was getting a visit from the mafia! “Fill it or else we’re gonna take a finger.”

Well forget about it! I had that thing washed out and refilled in no time flat! Out to the post it went. And wouldn’t you know it…. It was about 1/3 of the way gone by the end of the night. Wow.

Hummingbirds are absolutely amazing. I’m working on getting some pictures of them from our feeder. Hopefully by the time you read this they’ll be up.

With so many hummingbirds threatening me Don Corleone style, Melissa and I thought that maybe it was time to do something drastic….. So we got another hummingbird feeder.

We got that one up and filled and put it on the other side of the house. This morning as we were having coffee the hummingbirds came to feed. All of the photos you see here were taken this morning.

What a great way to start the day!

This entry was posted in Daily, Nature. Bookmark the permalink.