Last week I managed to get over to Ash Creek for a short hike. The weather, which had been really nice the day before, had gotten pretty nasty. But I was craving some exercise outdoors and decided that a little drizzle and temperatures in the high 40’s wasn’t all that bad. I decided to go anyway.

I took the back entrance to the land because it’s much more isolated and quieter and you can access some of the trails immediately. Imagine my surprise as I walked up to the gate to begin my hike and found a dead something or other next to the trail. (Don’t worry – nothing graphic here). I don’t know if it’s a bobcat or what? It looks like it had been there for a short while but it did not look as if any of the turkey vultures or hawks had found it yet. 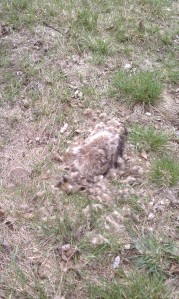 I had a nice hike, although hiking without the dog is not nearly as fun. There’s something about having a companion on those hikes that make them truly worthwile. You enjoy it just that much more because you know he is having the time of his life and he thinks you’re super cool for taking him out there.

But I hiked along the creek for a while enjoying the sound of it running through the rocks. I immagined that it was swollen from all of the rain and the snow run off that we’ve been experiencing here in south western Wisconsin for the past few weeks.

Video can be found HERE.

After a walk of about 45 minutes, I headed back to the warmth of the car and then on to Richland Center to run some errands. 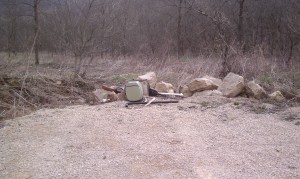 Trash dumped at the end of Munch Lane.

When I got back to the car I noticed that someone had deided to use this dead end road as their own personal dumping ground. What’s wrong with people? How much more difficult would it have been for them to dispose of this properly?

On a lighter and happier note, as I made my way to Richland Center and then on home along county road ‘OO’ I saw 2 Llamas, and a bunch of newborn lambs. (Plural?) 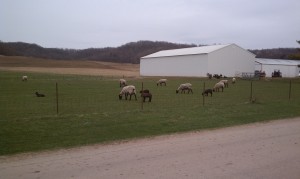 This entry was posted in Adventuring, Daily, Nature. Bookmark the permalink.